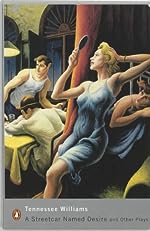 A Streetcar named desire and other plays

A Room with a View

A Pale View of Hills

Metamorphosis and Other Stories - Works Published In Kafka's Lifetime

To Kill a Mockingbird

The Curious Incident of the Dog in the Night-time

The Oxford History of Britain

Tennessee Williams's sensuous, atmospheric plays transformed the American stage with their passion, exoticism and vibrant characters who rage against their personal demons and the modern world. In A Streetcar Named Desire fading southern belle Blanche Dubois finds her romantic illusions brutally shattered; The Glass Menagerie portrays an introverted girl trapped in a fantasy world; and Sweet Bird of Youth shows how we are unable to escape 'the enemy, time'.

Tennessee Williams was born in 1911 in Columbus, Mississippi, where his. grandfather was the episcopal clergyman. When his father, a travelling salesman, moved with his family to St Louis some years later, both he and his sister found it impossible to settle down to city life. He entered college during the Depression and left after a couple of years to take a clerical job in a shoe company. He stayed there for two years, spending the evenings writing. He entered the University of Iowa in 1938 and completed his course, at the same time holding a large number of part-time jobs of great diversity. He received a Rockefeller Fellowship in 1940 for his play Battle of Angels, and he won the Pulitzer Prize in 1948 and 1955. Among his many other plays Penguin have published Summer and Smoke (1948), The Rose Tattoo (1951), Camino Real (1953), Cat on a Hot Tin Roof (1955), Baby Doll (1957), Orpheus Descending (1957), Something Unspoken (1958), Suddenly Last Summer (1958), Period of Adjustment (1960), The Night of the Iguana (1961), The Milk Train Doesn't Stop Here Anymore (1963), and Small Craft Warnings (1972). Tennessee Williams died in 1983 Peter Shaffer has written of Tennessee Williams: 'He was a born dramatist as few are ever born. Whatever he put on paper, superb or superflous, glorious or gaudy, could not fait to be electrifyingly actable. He could not write a dull scene ... Tennessee Williams will live as long as drama itself.'

Cat on a Hot Tin Roof