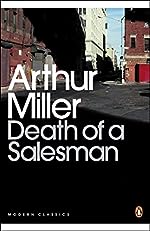 Death of a Salesman

Certain Private Conversations in Two Acts and a Requiem

Bird by Bird - Some Instructions on Writing and Life

Frankenstein - Or `The Modern Prometheus': The 1818 Text

The Fall of the House of Usher and Other Writings

The Member of the Wedding

A Moon for the Misbegotten

The tempest - The Tempest

One Hundred Years of Solitude

The Absolutely True Diary of a Part-Time Indian

The Bloody Chamber and Other Stories

Medea and Other Plays

In the spring of 1948 Arthur Miller retreated to a log cabin in Connecticut with the first two lines of a new play already fixed in his mind. He emerged six weeks later with the final script of 'Death of a Salesman' - a painful examination of American life and consumerism. Opening on Broadway the following year, Miller's extraordinary masterpiece changed the course of modern theatre. In creating Willy Loman, his destructively insecure antihero, Miller himself defined his aim as being 'to set forth what happens when a man does not have a grip on the forces of life'.

Arthur Miller was born in New York in 1915 and studied at the University of Michigan. His plays include All My Sons (1947); Death of a Salesman (1949), which won the Pullitzer Prize and the Dram Critics' Circle Award; The Crucible (1953), which won a Tony Award; A Memory of Two Mondays (1955); A View from the Bridge (1955); After the Fall (1963); Incident at Vichy (1964); The Price (1968); The Archbishop's Ceiling (1977); The American Clock (1980); Playing for Time (1981), which won the Peabody Award; Two-way Mirror (1985); Danger: Memory! (1986); Ride Down Mount Morgan (1990); The Last Yankee (1992); and Broken Glass (1994), which won the Olivier Award for Best Play in 1995.
His play The Creation of the world and Other Business (1972) was made into a musical, Up From Paradise, in 1974. His screenplays for film include The Misfits, starring Clark Gable and Marilyn Monroe; and The Crucible, starring Daniel Day-Lewis, Winona Ryder and Paul Scofield, which was nominated for an Academy Award for Best Screenplay in 1996. Arthur Miller has been awarded Honorary Doctorates from Harvard and Oxford universities.
In addition to his works for stage and screen he is also the author of Focus , a novel; I Don't Need You Anymore, a collection of short stories; and Plain Girl, a short work of prose fiction. In collaboration with his wife, the photographer Inge Morath, he has published In Russia (1969); In the Country (1977); Chinese Encounters (1979); and Salesman in Beijing (1984), based on his experience directing a production of Death of a Salesman in China.
His autobiography, Time Bends, was published in 1987.

"Death of a Salesman"

A View from the Bridge

The crucible - A Play in Four Acts